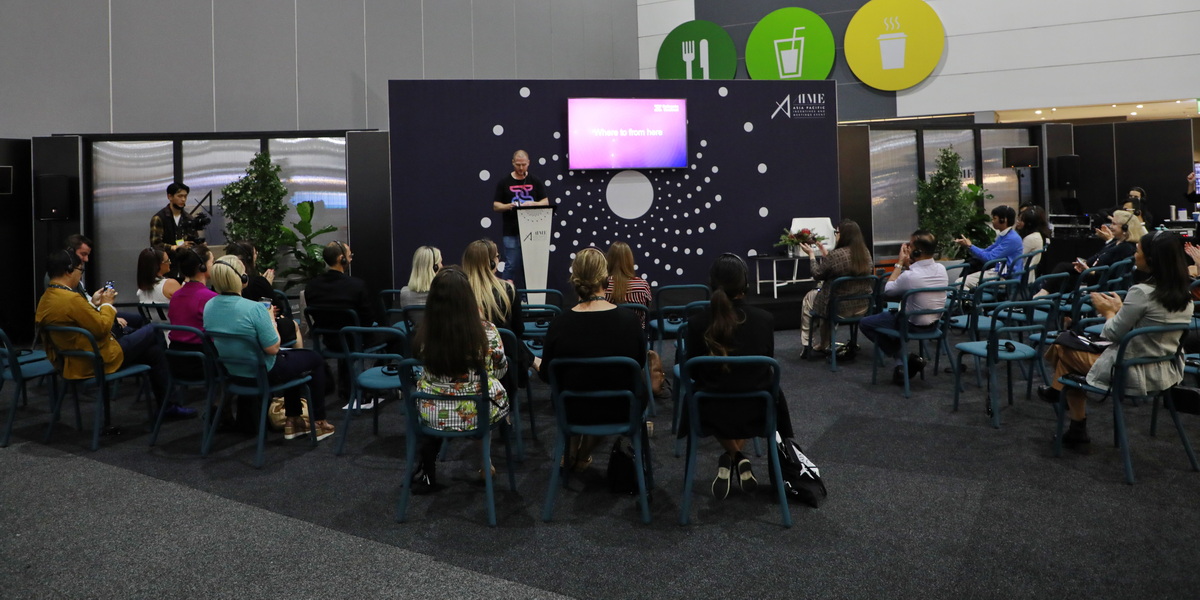 Delighted to be back at AIME

It was great to be in Melbourne again and to see so many people meeting, mingling, networking and partying.

Yes it was sparse. Nowhere near as many exhibitors as in previous years – especially from overseas.  But that was to be expected and not to be seen as a negative. The positive was that so many exhibitors committed to a show that was still uncertain – both as to whether it could go ahead and whether buyers would turn up. And they did, 225 exhibitors and 344 hosted buyers and many more not hosted.

The core exhibitors were the Australian states and territories, represented by state and regional bureaux with their members – Melbourne and regional Victoria being the biggest closely followed by Sydney and regional NSW. Then Brisbane, Gold Coast, Cairns, Sunshine Coast, Canberra, Adelaide and NT. The Republic of WA was represented by Business Events Perth and two hotels. A notable absence was Tasmania (just one hotel represented).

New Zealand was the largest of the international stands with a smattering of South East Asian countries represented. Japan took a novel approach utilising a large LED screen to promote their exhibitors who were taking part virtually, as were some NZ exhibitors.

COVID of course took its toll – half of the Tourism Australia team were unable to attend and a stand was unattended as the owner had been struck down.

AIME show director, Silke Calder introduced a novel approach to announcing the end of each pre-booked appointment – a DJ who encouraged people to their next appointment accompanied by a musical sting.  The DJ was at times joined by an announcer to promote and draw prizes donated by various exhibitors. This actually became very annoying when exhibitors were trying to make a presentation to the media and was verging on the ridiculous when the Tourism Minister Dan Tehan did a doorstop in the media centre (right under the DJ booth) – more on that doorstop next week.

The knowledge program kicked off with Talk2 Media and Events’ Matt Pearce welcoming delegates to a face to face learning without the distraction of kids and/or animals.  He also observed  that in the lead up to AIME they faced two questions “Can we run an event?” then “Can we find the staff to run an event?”

The keynote presentation was by Steve Sammartino billed as a “futurist” but I prefer to call him a technologist (I’m with Ian Whitworth when it comes to futurists).  Sammartino’s take on technology is as refreshing as it is insightful. Here are few of my take aways.

I’ll have a full report next week but it has been quite a while since 800 people gathered together for the AIME welcome function. Buyers and exhibitors were keen to network, and to party, and they did!

The Lume at MCEC

The hosted buyers and media were treated to a very enjoyable, immersive cocktail party at The Lume.

Essentially a hall of the newer section of the MCEC has been turned into a 3,000 square metre, 11-metre high digital art gallery, with an hour long presentation on the life and art of Vincent Van Gough.  During the day this experience is open to the public and can be booked for after-hours events such as private dinners, cocktail parties, product launches and much more.

MCEC CEO Peter King told ASE they have been surprised at the success of the venture – both the public visitation and the private/corporate usage.  A great advantage is that the screens can be reprogrammed at the flick or a switch, so bespoke content can be prepared in advance, rehearsed after hours and activated in minutes – essentially digital décor and entertainment. The only real time constraint is setting up tables and chairs for a dinner or cocktail party for up to 1200 pax. As the floor is covered with digital projections this also could be programmed to provide the table décor.

I expect this venue will have a long life with various shows following on.