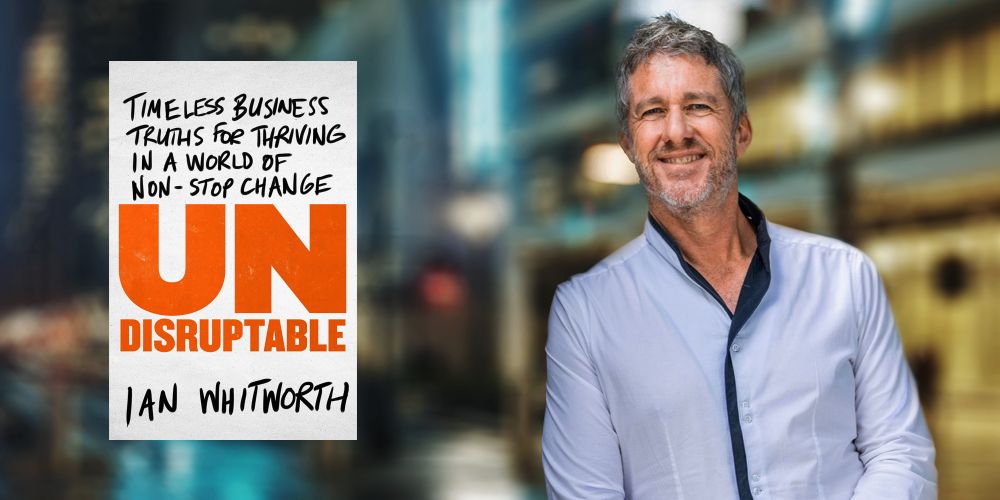 From a Tasmanian revolution to UNDISRUPTABLE

I’ve been following Ian Whitworth’s blog “Motivation for Sceptics” since he started it as “Kill all MBAs”, but long before that I followed the antics of his marketing stunts starting with the MEA conference in Hobart in 2007, which I reported at the time…

First up they postered vantage points such as bridges along the route from the airport to the city, and they had more “revolution” posters around the area that the conference was being held in. Next they took a trade stand at the conference and they also parked their black “AV response” van opposite the conference venue.

Their “revolution” T shirts distributed at the conference were a hot item and were quietly sought by Staging Connections Sydney staff attending the conference.

Since then Whitworth has engineered promotions at each of the subsequent MEA conferences – the most memorable were the SceneJet parked on the tarmac as delegates arrived for the Hamilton Island conference and the beer and cider ads they produced during the Darwin conference (even I was in it).

Like Mambo, Scene Change has never been constricted to a single logo design and each year’s edition is produced as a take on classic ads. The printed T shirts eagerly sought by attendees at the MEA conferences.

Whitworth’s blog has been essential reading since COVID hit, as he shared the challenges facing “Australia’s #2 AV Company” which, incidentally was not #2 when they launched that statement and may not be now either – but going for silver is a different mindset I found out from reading his book, UNDISRUPTABLE.

So now to the book

Over the decades I’ve read a lot of business and self-help books (and attended the seminars). Starting with Napoleon Hill through to Stephen Covey and Anthony Robbins. The most useful of them all was The E-Myth by Michael Gerber, which gave me the most direction for running my own business.

Now, in UNDISRUPTABLE I have a new set of guidelines framed in the final chapter “How to succeed in sixty-four words”. So when you buy the book go straight to the last chapter and read the “Eight low-key steps to success”.

What makes this book so readable is Whitworth’s style, conversational, witty, irreverent, insightful and at times laugh out loud. Secondly the eight chapters are divided into sub-chapters that are easy to consume in bite sized chunks – perfect to pick up and not have to leave half way through, if for example you like to read on the bog.

With chapters like “Busting the big business myths” I found myself revisiting Michael Gerber and in “Strategy” it was Stephen Covey. However neither of those esteemed writers were as down to earth as Whitworth. Neither of them could come up with a chapter title like “The $15,000 coffee and other ways to repel customers”.

Most business books assume you have ambitions to beat every other competitor in your field. Whitworth focusses on being the best in your field, and that is not necessarily the biggest or flashiest. What it does mean is being the most honest – with your customers, your staff, your partners and most of all with yourself.

While most business books cover networking, I’ve never come across one with a chapter on how to “stay classy” while getting pissed (or not) at a networking function.

Despite some of this sounding blokey, Whitworth understands women and acknowledges that in the business events industry in particular there are a lot of women in key positions. This book is for you too.

Whitworth is offering a special deal for Father’s Day – he will create a personal video message for your dad if you buy the book.

My father is deceased so I’m going to hit him up for a personal message to my daughter (business owner and entrepreneur) because I know she is going to enjoy it as much as my Dad would have.