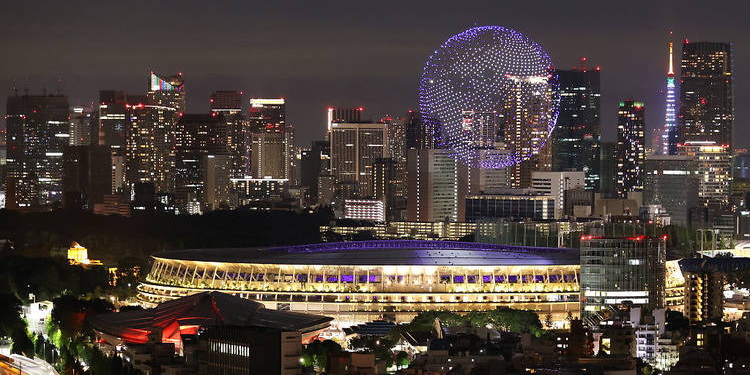 It was unlike any Olympics opening we have seen before

Dull and boring are a couple of descriptors I’ve heard, however I want to go a little deeper.

If I had to use one word it would be “sparse”.

Normally what we see is a massed spectacle designed for television.  This time we had a TV event with some elements presented live.

As a TV event it was not only sparse, but slow as well, in fact it lacked dynamics (which Sydney, Athens, Beijing, Rio and London certainly had).

Andrew Walsh talks about ceremonies taking the viewer on a journey rather than just spectacle.  In Olympics terms that really kicked off with Barcelona in 1992, reverted to spectacle in Atlanta 1996, then back to the journey in Sydney and subsequent Olympics.

Tokyo had neither. In place of spectacle we got technology and under the circumstances that is understandable. However a stronger connecting storyline would have helped.

So what worked on the technology side? The countdown at the beginning was captivating, the orchestra tuning up and images of the instruments juxtaposed with sporting images was a nice touch. The construction of the Olympic rings was reminiscent of the showcase of basic technology invented by the Chinese and showcased in Beijing. It also reflected the industrial technology in the London ceremony.

Each Olympics serves up its own memorable moment. In Sydney it was the giant sheet covering the athletes then used as a projection screen (and yes Cathy in the Cauldron). In Athens it was the double helix and now in Tokyo the drone display was a knockout.

A very poignant moment was the solo dancer and the moments silence to remember athletes who have passed away due to COVID and those killed at Munich 1972. This was especially poignant in the shadow of the sacking of the ceremonies director in the lead up due to jokes he made about The Holocaust some decades ago.

I’ve been fortunate to have attended five of the previous six Olympic Opening Ceremonies and I didn’t want to miss this one – albeit from home.

All things considered I thought they did an amazing job with what would have been the toughest brief ever. It was unique and it was different – it had to be, as COVID has changed all the rules. Not too flashy and in your face but with respect to the world we live in at the moment. The drones component really stood out for me.

We will never know what it would have looked like pre-covid, but it will have a lasting impact for future Games, perhaps with a new motto – contemporary, inclusive and simpler.

Another element that makes the opening ceremony drag is the entry of the athletes. Yes I know that without them there would be no Olympics but someone has to come up with a better way of doing it.

Looking at the timeline – the athletes entry went on for 120 mins (imagine if they had all entered) out of a total of 230 mins. And why couldn’t Channel 7 plonk all their commercial breaks into the athlete’s entry section instead of interrupting the entertainment.

Of course the broadcast wouldn’t be complete with a few inane comments from the commentators. “I did not expect to see the voice of Keith Urban” Huh? And seriously we do not need John Lennon’s “Imagine” explained to us.

Australians involved in Tokyo include Norwest who are providing audio production for the Opening and Closing ceremonies.  Norwest founder Chris Kennedy told ASE “Tokyo 2020 will be remembered as being like no other but for the Norwest team everything in Tokyo needed to be done exactly as the previous four events were done, audience or not.”

The flashing lights as swimmers are introduced at the Tokyo Aquatics Centre, the mist that floats over the pool as ‘Smoke on the water’ blares out, is all of his making, an art form he’s been developing since his first Olympics in Sydney 2000.

Tokyo is his fifth Olympics, and understandably, the most challenging.

“My job usually is to entertain the spectators within the venues,” Bowman says.

“This time it’s quite a different challenge because it’s about creating an atmosphere when there are no spectators.”

It’s not as if he had long to prepare for what became a worst-case scenario for spectators. For months foreign spectators have been banned but the expectation was always that there’d be at least a capped number of locals ticket holders allowed to attend the Games they have paid billions for.

The Japanese government made a final decision only weeks out from the Games beginning.

“So at that point we were still doing all the things we normally do such as introducing the athletes, giving the information so people still know what’s happening, still trying to have the music but obviously no interactive elements like no kiss-cam for this particular event.

By the way, if you want to watch the complete replay of teh opening ceremony (without commercials) it is on 7+ but you need to use the search function to find it.