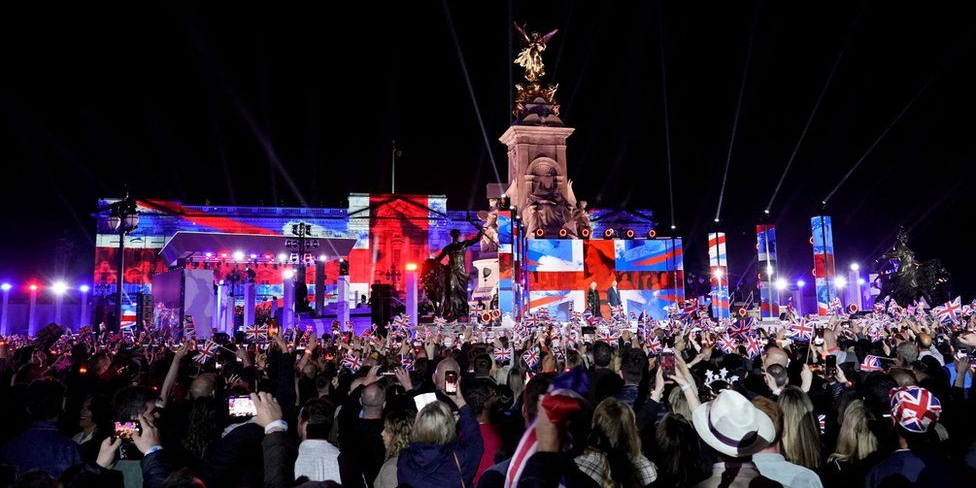 Last night I watched two and a half hours of spectacle (interspersed with commercial breaks every 5 mins).

The Platinum Jubilee Concert was produced by the BBC and goes to show what can be achieved when a national broadcaster is properly funded. Sure the British Tories have attacked funding for the BBC but not to the same extent that the Australian Tories have gutted the ABC. Remember it was Ric Birch as the producer of the ABC coverage of the 1982 Brisbane Commonwealth Games who introduced Matilda, the giant kangaroo, and changed the format of Games opening ceremonies forever.

Yes any number of producers with a decent budget could have pulled it off but the point is that the BBC have been able to hang onto extraordinarily talented people who have worked together over many years.

Yes there were a couple of dud moments, mainly by people I’ve never heard of such as Elbow (boring), the guy in the blue sparkle suit (boring), someone called Celeste who murdered  “What A Wonderful World” by singing flat. And then the most well-known, Diana Ross, who appeared to be lip syncing, although her final song, Ain’t No Mountain High Enough was stunning.

But this was all completely overshadowed by…

The opening sequence of The Queen with Paddington Bear (charming) which segued to a line-up of military drummers beating out the rhythm of “We will rock you” (with Betty and Paddington tapping along) and of course Brian May up high (with Queen Victoria).

All the dance routines – particularly Diversity, who covered songs by British acts of the past 70 years.

George Ezra is one who I’ve not heard of but want to hear more of – so smooth.

Alicia Keys nailing it even though she seems confused about whether she likes New York or London better.

The fact the British military have and orchestra (not just bands) which provided great accompaniment to so many of the artists.

But more than anything else the staging and the technology.

We are used to dual stages where you can swap stages to do a changeover – but four stages, that was impressive! The design to bring all that together was spot on. Then when the sun set – the projections onto Buckingham Palace, what a great canvas and visuals. And to top it off the drones, very clever on their own and great integration with the projections.

The audio production must have been a nightmare to pull together- so many inputs is one thing but to project that sound in so many different directions. Interestingly, although the screens lining The Mall were evident, there didn’t appear to be any speakers serving that area.

Two of the key organisers were Claire Popplewell, creative director for BBC Studios Events and Mark Sidaway, executive producer for the BBC’s Platinum Party at the Palace.

Queen’s platinum jubilee concert 2022: the Platinum Party at the Palace – as it happened

With gems such as …

And now Andrea Bocelli is here to sing Nessun Dorma. Nessun Dorma, of course, translates to None Shall Sleep. That’s quite the choice for a man who is currently shouting as loudly as he can right next to a 96-year-old woman’s house at half past nine at night.

They’re doing Girls on Film now, and models are catwalking up and down the stage in fancy dresses. I am enjoying this bit far more than I anticipated. Plus, Buckingham Palace is all lit up with the word “Fashion”, just for any attendees who couldn’t grasp the complicated subject of the moment.

The broadcast is available on the 7plus streaming platform.

on The Platinum Jubilee Concert.