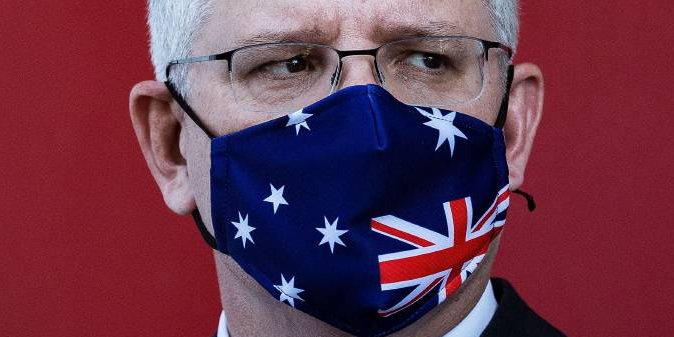 What a week – COVID is now rampant throughout NSW, ACT and Victoria and we are still getting mixed messages from Gladys Berejiklian and Scott Morrison.

Scott Morrison has issued an implicit warning to state and territory leaders that they must ease restrictions when vaccination rates reach 70% and 80%.

He said today: “The national plan is a deal with Australians – we’ve said you’re persevering lockdowns, taking instructions, getting tested, you’re isolating, you’re getting vaccinated. It’s a deal that says when we achieve 70% and 80% there will be changes. Premiers and chief ministers have signed up to that plan. They’ve signed up with the Australian people.”

However the Doherty Institute modelling that underpinned the 70-80% targets assumed a low level of community transmission – not hundreds of cases as is currently occurring in Sydney.

So Labor premiers and chief ministers in Queensland, the ACT, Victoria and Western Australia have questioned the ability to ease restrictions at 70% and 80% if the NSW outbreak is still raging.

But Morrison is clearly warning these leaders not to backtrack.

Asked if states and territories will unlock at 70-80% regardless of the number of case numbers, Morrison said that was the “national deal” they made at national cabinet (Labor state and territory leaders dispute this characterisation).

“I think it is important to say to people that if we have higher rates of vaccination there’s every chance you can do something more than what you can today.

We have seen how the incentive of getting back to work in the last few days has really ignited people to get vaccinated. These incentives work.

If we can incentivise people to say, if you are fully vaccinated you might be able to undertake an activity which you can’t now, that is a positive.

I think most people would appreciate that. September and October will be challenging months in terms of public policy, how we move forward, because we wouldn’t have reached the 70% but we will have increased vaccination rates. And some parts of greater Sydney are demonstrating quite lower numbers of cases.”

Then today the premier announced that Sydney’s lockdown would continue until the end of September – like that wasn’t expected?

So that pretty much puts paid to the 50% easing – simply because even though the jab rate might be increasing, so is the infection rate.

So if anything, in October we may see the reopening of some retail, hairdressers and maybe some outdoor dining. On the latter, remember how Melbourne encouraged local councils to close off streets to allow for outdoor dining when the weather warmed up.

According to a report from the Australian newspaper on Friday bars, restaurants and gyms in NSW could reopen to the fully inoculated once vaccination coverage across the state reaches 70%.

Reportedly this potential easing of restrictions is included in a proposal drawn up by government ministers and awaiting sign off from Gladys Berejiklian.

At this stage we’re expecting to reach the 80% vax rate in late November. From a ring around I did over the past week very few in the industry are expecting to have events happening again this year. The big test will come on New Year’s Eve – will any city loosen up and allow crowds to gather for fireworks.

Now you might be wondering, if NSW plans to relax restrictions for vaccinated people, how will you actually prove you are vaccinated?

Here is what Berejiklian had to say today:

“At the moment you can go through Medicare and verify you have been vaccinated, that has real-time information.

… to prove their vaccination, you go to the Medicare app, there is real-time information about how many doses you have had.

People can use that, but I will say Service New South Wales is working on good technology when people will be able to do everything together the one go.”

Apologies for the Sydney centric introduction but let’s face it – the Sydney outbreak is stuffing up the whole country at the moment.

Incidentally, I live in, and am confined to, the LGA of Cumberland. But I’m fine as long as I can still go for a walk each day.

Qantas and SPC are leading the charge. The sticking point is that no government will protect businesses from litigation over a mandate.  It seems that it will take the courts to decide. Some smart arse lawyer will lead the charge in the name of “personal freedom” which will be defended by a counter argument based on workplace health and safety. The argument being that the employer (or venue, event organiser, etc) has a duty of care to protect the health of their employees, guests, patrons, etc.

Once that has been settled in favour of the health aspect then you can expect mandatory vaccination if you want to work in certain industries, travel, attend events, etc and those who want personal freedom can stay home and read conspiracy theories on their 5G phone.

Splendour in the Grass, which when last held in the North Byron Parklands in 2019 attracted more than 40,000 festival goers each day and generated more than $60m in gross regional product, has been pushed back from late November to July 2022.

Splendour in the Grass’s co-founders, Jessica Ducrou and Paul Piticco, said in a statement issued on Friday that the decision to postpone had been made due to the slower than anticipated vaccination rollout.

The news comes just days after Bluesfest made a similar announcement, and Opera Australia confirming its digital production of Wagner’s Ring Cycle, scheduled to take place in Brisbane in October, was also being postponed due to border closures.

Looking further ahead, The Outback Music Festival Group has announced that both its Broken Hill Mundi Mundi Bash and Birdsville Big Red Bash in 2022 will operate under a “no jab, no jive” policy.

The founder and managing director of The Outback Music Festival Group, Greg Donovan, said on Friday the decision to mandate that all attendees 16 years and over must be vaccinated against Covid-19 was made to protect local Indigenous communities.

“Whilst we respect the choice of individuals as to whether or not they decide to get vaccinated, due to the nature and location of our festivals we have decided to make vaccination a condition of attendance for everyone aged 16 and over – including patrons, staff, contractors, vendors and volunteers.

This will offer all in attendance the best available protection against Covid-19. It will also ensure that remote communities are protected as much as possible from our patrons travelling through and visiting these towns and communities.”

Bluesfest director Peter Noble was talking on ABC radio about having to cancel again It is obvious that we cannot present Bluesfest in a safe manner in October he said.

“We have rescheduled back to our usual timing with dates over the Easter long weekend next year, a time we expect things to be returning to normal … lockdowns will be consigned to history.”

Meanwhile in Chicago – Lollapalooza has shown “no evidence” of being a COVID superspreader event, Chicago health official says

An estimated 385,000 crowd at the annual Lollapalooza music festival this year resulted in a total of 203 COVID cases reported in relation to the event, and there have been no hospitalizations or deaths reported as of Wednesday. More than 90% of the event’s crowds were fully vaccinated, with 0.04% of vaccinated guests reporting that they tested positive for the virus. Of unvaccinated attendees, 0.16% have reported contracting the virus since attending.

This week’s wrap up in ASE and elsewhere

Where to now with Minister Dan Tehan?

Gary Fitz-Roy asks Where does the power rest when it comes to reopening events?